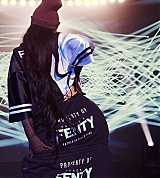 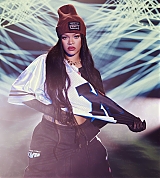 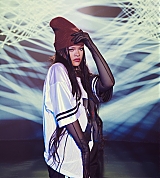 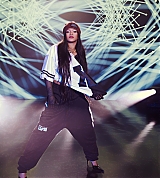 Ever since the release of Fenty Beauty, we’ve been looking around for good quality images, and finally our gallery is updated with some! Head over there for stunning close-ups and the beautiful products themselves.

By request we also made HD screen captures of not only the behind-the-scenes footage, but the entire Fenty Beauty Youtube channel. And oh right, there are also a few gifs. Enjoy!

Behind the scenes/making of stills

END_OF_DOCUMENT_TOKEN_TO_BE_REPLACED

Rihanna shines bright like a diamond on the latest cover of Rolling Stone, and in this Behind the Scenes video, the singer gives a glimpse into a day of her life as she shoots the issue’s cover at Milk Studios in Los Angeles.

“Where my hos at? Hair and makeup?” she asks upon entering the building. But it’s all in good fun, as she jokes on set: “I came to work with my top down.”

Photographer Terry Richardson works Rihanna with a variety of outfits, and the singer sends her praise right back to Richardson. “He’s one of my favorite photographers. He’s fun, he’s sexy. It’s almost a little edgy,” she says, noting it’s her third time working with Richardson.

“To be in Rolling Stone is the shit,” says Rihanna. “If you think about the people that have been [on the cover], you think about legends like Bob Marley, so it’s special to have reached that mark.”

Check out some high quality photos of Rihanna and Andy Cohen from Thursday’s Facebook Live event. Make sure to scroll down and watch the interview as well.

Check out some more unseen photos of Rihanna’s performance in Baku from October 6.

Over 70 photos have been added into our gallery, including both on stage and backstage pics.

Recently we’ve updated gallery with new and old photos.Check them out!